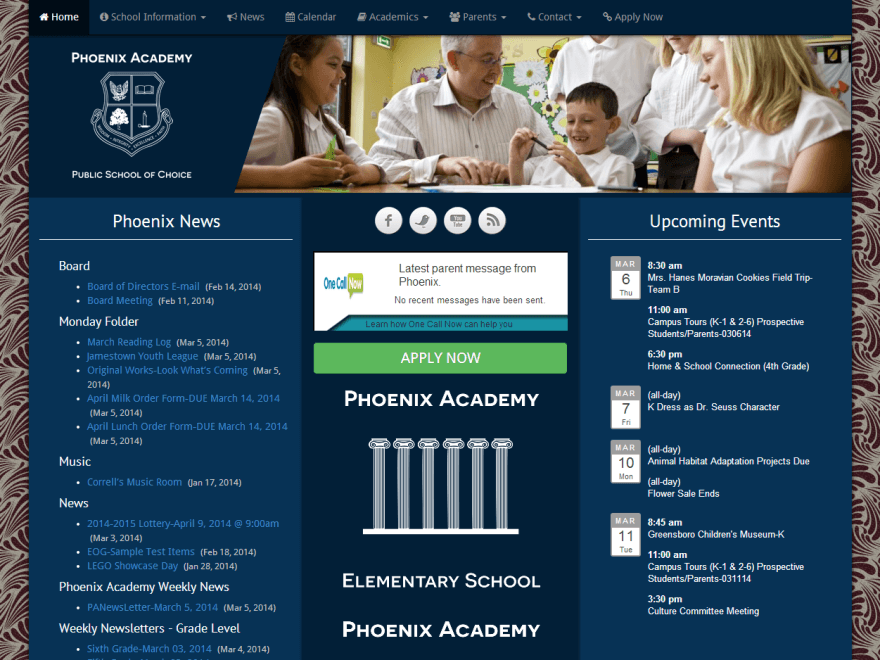 The Phoenix Academy site was the second site I worked on through my association with Paul Norcross (from the High Point Republican Party).  He and his wife, Kim (also the superintendent), founded Phoenix as a charter school in 2000, one of the Triad’s first.  Phoenix has been in a major expansion the last year or so, expanding beyond their initial building into one which will eventually house the entirety of the lower program (Elementary and Middle) and embarking on the final steps to begin to offer a complete K-12 experience.  Phoenix had been working with another local developer to manage their web presence and Paul and Kim decided that it was time to move in a different direction.

The main focus of Phoenix’s online presence was an application piece (charter schools require parents to apply for entrance).  The previous developer had created his own system to handle this, and one of my sticking points about taking on the design was that I would be unable to support this type of development.  I researched several commercial options available, and ultimately, Kim and her staff settled on SchoolAdmin.

With that out of the way, it fell on me to port the existing content into a WordPress installation and come up with a more modern (and as always, mobile-friendly) design.  One of the big drawbacks, in my opinion, was that the old design focused too much on the staff at Phoenix to save files and FTP them into the site.  From an SEO standpoint, that’s not really the best thing in the world.  There were also problems in that the staff had started to upload scans of everything as TIFF files, which aren’t exactly web-browser friendly.

Now, all of the new items to Phoenix are posted using regular posts or custom post types.  Pictures can be inserted for easy viewing.  The calendar now offers parents and staff the ability to subscribe via an iCal feed.

Some of the graphics/logos were already in place, but I’ve been working with Paul and Kim to continually build out a standardized branding presence including new logos for the anticipated tracks of study in the high school (and even the elementary and middle schools).