I just realized it’s been almost two months since I’ve posted.  Hard to believe.  I have my excuses, as usual.  A lot’s been going on.

One of the big things I’ve been doing (aside from working) has been working on my yard.  I didn’t do much last year, mainly just keeping up.  The previous year I did a lot of work to the front yard, just working on the “curbside” appeal (or was that 3 years ago?).  I’ve neglected the backyard somewhat, in favor of presenting an appealing curb view.  I’ll save you the bandwidth if you want by only presenting some before and after pics, and link you to the rest of the pics. (Excuse the fact that I haven’t cut the grass yet, it was HOT today.  I already spent enough time outside putting in the last tree.) 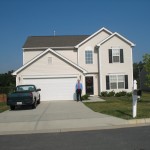 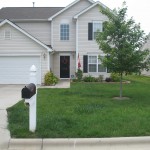 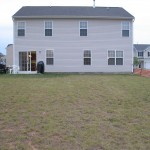 Back of House (Move-in) 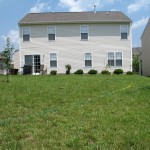 Back of House (Now) 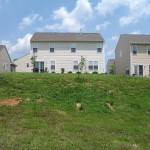 Back of house (street view)

(Edit – I forgot to post the link to the gallery of all the pics – http://www.t-gk.net/photogallery/springhousepics/)

Four of the trees I ordered from a site called “Fast Growing Trees”, which is out of Charlotte.  Two Dynamite Crepe Myrtles, 1 Hybrid Poplar, and 1 Tulip Poplar.  The fifth tree is a Pin Oak i picked up from Lowe’s (and got 25% off).  The back of the hill is where I put the two crepe’s (on the corners) and the hybrid poplar is in the middle.  The Tulip and Pin Oak are closer to the house to provide me shade (since the back of the house faces west).

The four trees I ordered were for a reason.  Lowe’s & Home Depot only carry the more popular varieties for homeowners – Maples mostly, but also a few others, like the Bradford Pear and a different variety of Myrtle.  The Poplars are fast growers that tend to be stronger than most other fast growing varieties.  They should sprout between 4-8 feet a year, and get a maximum spread of 30-40 feet.  The oak is a slower grower, but it can get to 40-50 feet without effort. The crepe’s should grow to about 30 ft tall (if even), and will bloom red from around this time through Labor Day.

I’m a little worried about the tulip poplar.  NC is known for it’s red clay and it’s not a soil that drains well.  When I planted everything, I either used outright topsoil or mixed it in with some of the native dirt.  When I planted the tulip, I was running low on good soil, so I mixed in a bit of mulch and more of the original soil than I would have liked.  It didn’t drain well at all.  Initial watering I basically “flooded” it, and a week later, it was yellowing.  I dug it back out, and it was still basically sludge (smelled like sewer drainage, ewwww).  I’ve replaced all the soil and the mulch with dry stuff and barely watered it (as the root ball was still wet).  I’m hoping this holds up.

I’ve been working on filling in the bare spots in the grass.  That’s the main project for the rest of this summer is getting more grass in the front and back yard.  I’m thinking at this point that I’ll bite the cost for core aeration in the fall, do a heavy overseed then, as well as another overseed in the spring.  As you can tell by the pics, it’s come a long way in a few years.  (I just wish my neighbor to the right would work on their yard – giant dirt patch visible from my back door. The other projects, which are generally smaller in nature, is to do a retaining wall planter/ring around the tree in the front yard, and to actually put in some edging along the “shrub bed” at the back of the house.

When I put in the flower bed in the front a few years ago, I transplanted all the bushes from the front to the back, so that’s why they’re there.  Since the house faces a relatively major thoroughfare (it’s a dead end with a large church at the end), and the “back entrance” to my development, it’s amazing to see how many other houses on my street haven’t really done much with their back yards.

So anyways, that’s one of the big things I’ve been busy with.  Hopefully I’ll remember to post more updates in the near future.